5 Ways to Upgrade Your Dates For Extra Flavor

It’s Ramadan! And in addition to fasting, praying, reading Qur’an, and focusing on atonement and self-improvement, this month means dates. Lots and lots of dates.

If you’re Muslim, you know these fruits of the date palm tree, usually dried, show up in your households in the dozens if not hundreds during Ramadan. Eating them straight up to break your fast, as the Prophetic practice was, is a cherished seasonal memory we all have.

But there are ways to enhance your date eating experience. Whether you want to do something special for an upcoming iftar party or just want to try dates in a totally different way, here are some ways to upgrade your dates. 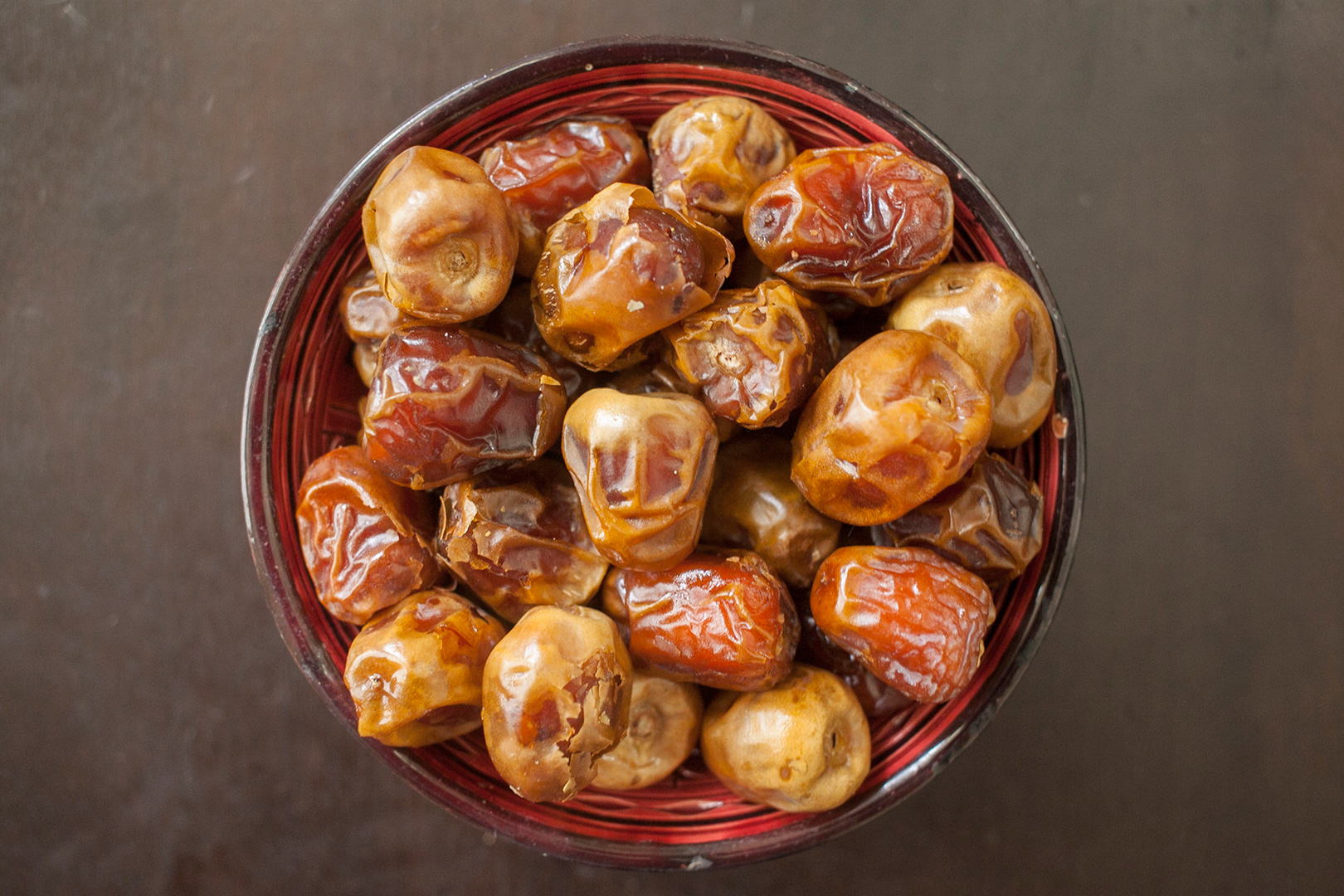 For most American Muslims, the most common variety you come across are Medjool dates, typically sold in those massive boxes that many struggle to finish even half of in a month. The next most common are Deglet Noor, the kind found at most American supermarkets (though, now they also stash Medjool in crazy quantities during Ramadan season).

But just like apples and oranges, dates come in many different varieties. Each one has its own distinctly different flavors and textures than what you’re used to with Medjool or Deglet Noor.

My first exposure to other varieties was while visiting Shaykh Yaser Birjas’ house. He served a couple types of dates the likes of which none of us guests had ever seen. Paired with some strong Arab style coffee and incense, it opened my American Muslim eyes to the world of other types of dates. Happy was me when he very generously gifted me a take home bag to enjoy myself.

I happened to be going for Hajj that year, and consulted with Shaykh Yaser which variety he recommended and brought home a couple kilos worth. In Madinah, for example, there are shops that sell dates in massive mounds that let you sample the different varieties to help you decide what to buy. I brought home the ones I liked the most and finished them pretty quickly. Since then, I’ve been getting a constant supply from some close family friends that visit from the UAE. 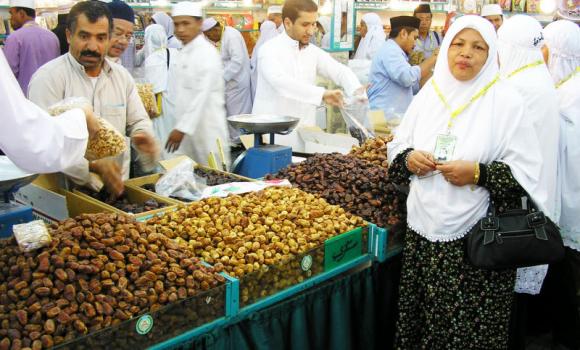 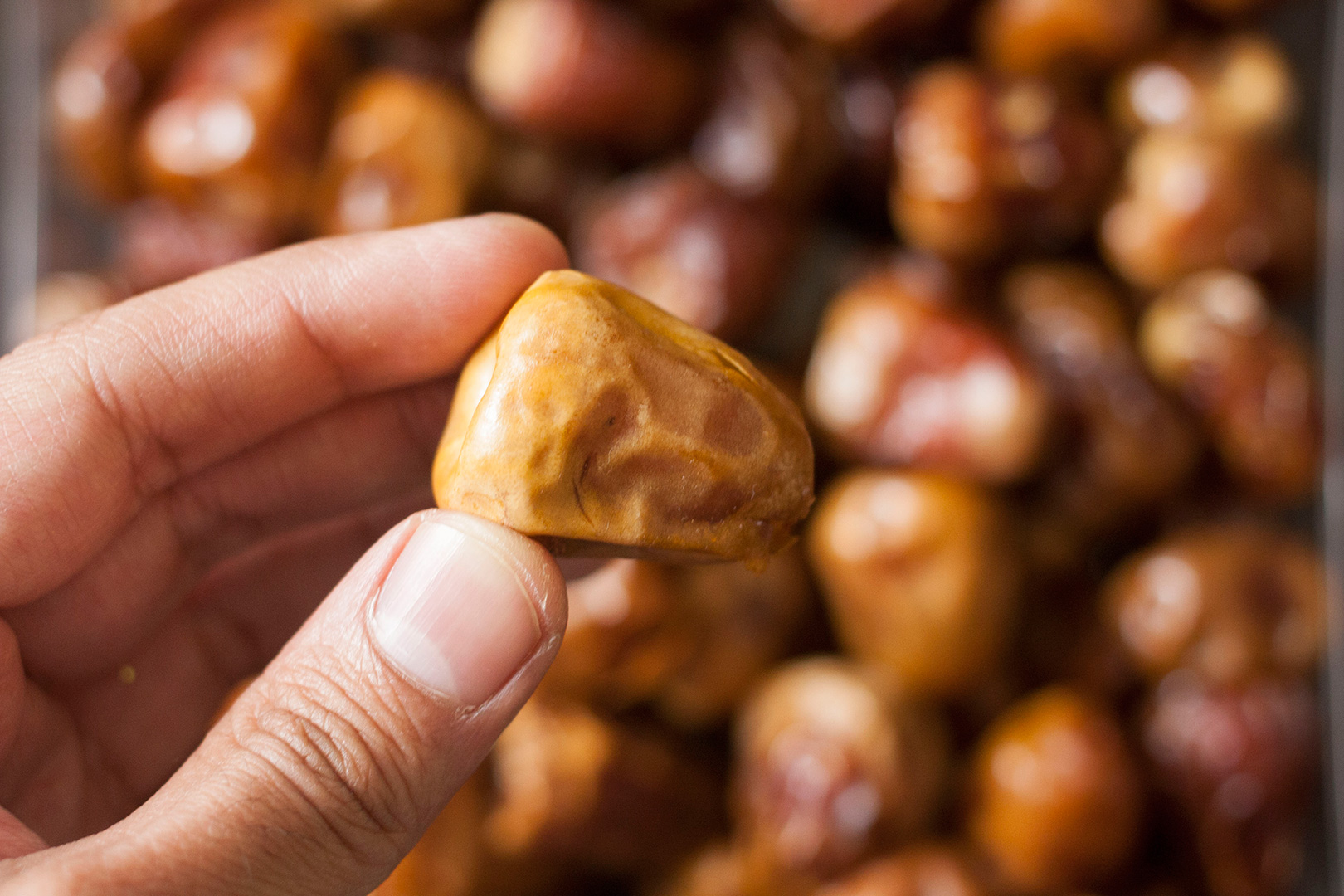 My favorite type of date and the one I request the most is the Sukkary. Grown in the Qaṣeem area of Saudi Arabia, they’re easily recognized by their almost reddish color when first dried that beautifully gradient into a golden yellow as they continue to dry.

What got me hooked on these dates was how they distinctly tasted like something happy from my childhood: cupcakes. Not sure how, but Sukkary dates’ strong sweetness carries flavor compounds that always reminds me of them, almost like cake batter ice cream.

Even better is when Sukkary dates continue to dry, which they tend to do, their sugars intensify bringing out an even stronger cupcake like flavor bordering on “ice cream shop waffle cone” smell and vanilla frosting. Pop a few with a glass of milk, and you have a snack that will give chocolate chip cookies a run for their money. 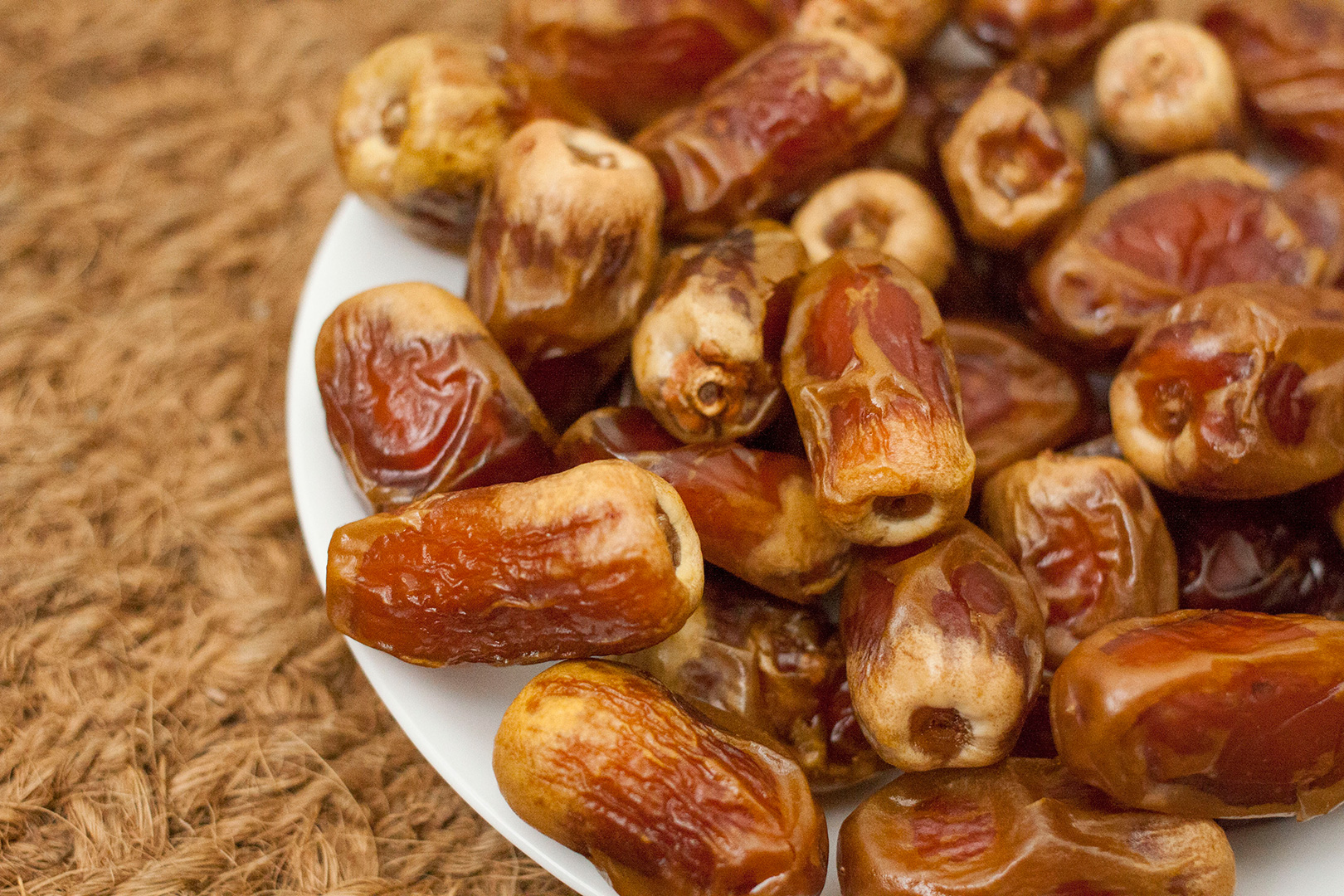 The other variety I like a lot are the hard to pronounce and strangely transliterated Sag‘ai dates. Technically, they are Ṣaq‘ī, or SAQ-EE (صقعي) but due to local dialects you’ll find them spelled as Sag‘ai. These kind are famous for their golden crown-like cap. Their flavor is like a lesser sweet Medjool but with a more rounded flavor and texture. A great all-around date you can’t go wrong with.

Before, dates like Sukkari and Sag‘ai were hard to find without traveling overseas. Today, varieties of dates are appearing well stocked Arab super stores where the shop owners are stocking better selection of dates.

But if not, there will probably be other varieties you can buy and try, as well. Find something, grab a box, and see what you like. It’s fun to try something outside your regular box.

2. Stuff them with aged or funky cheese 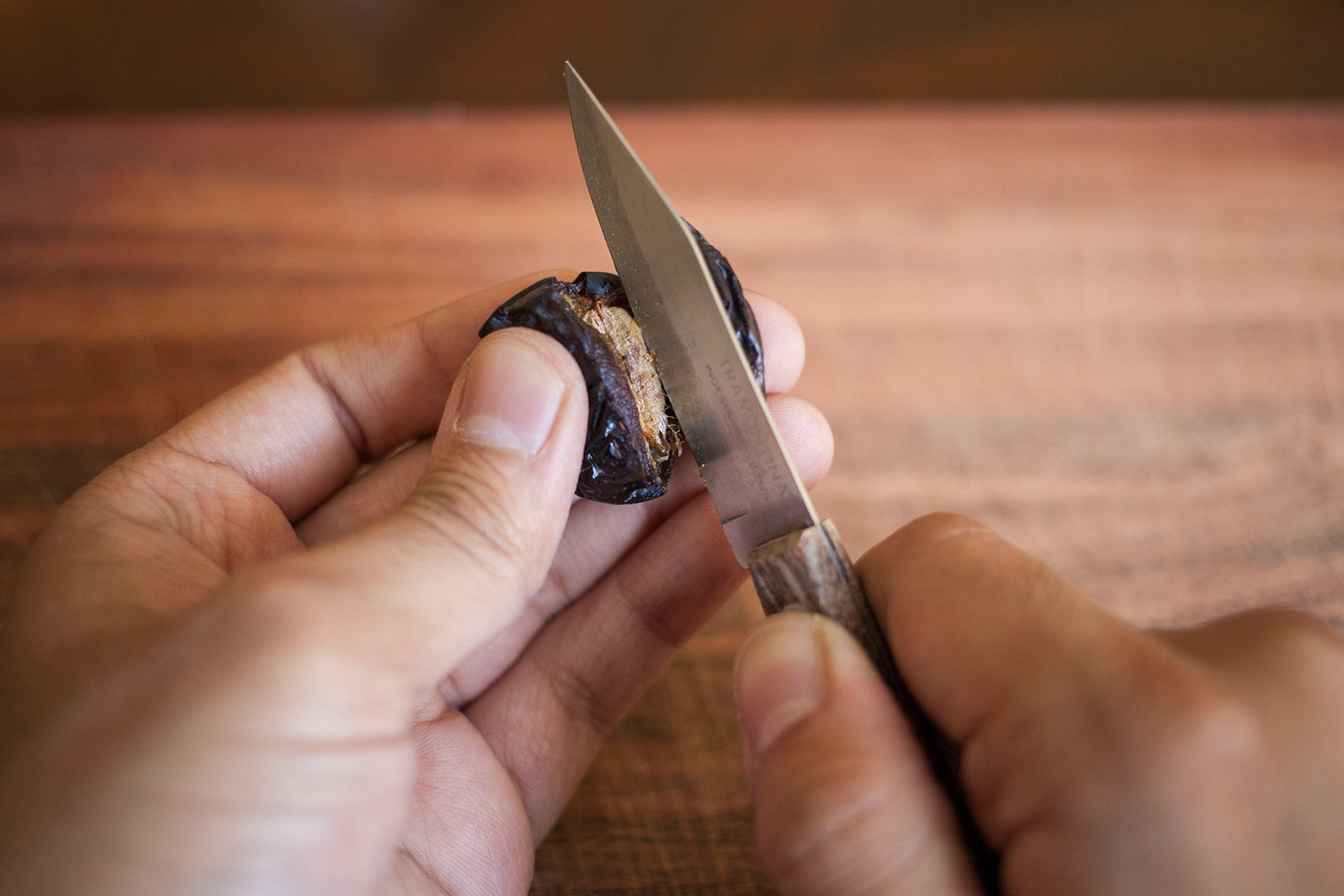 Dried fruits are notoriously sweet, and dried dates are the king of this trait. Pair that sweetness with the funkiness of aged cheese, and you get a combo that plays crazy tricks on your taste buds.

The method is simple. Pit your dates with a small paring knife by carefully slicing straight down one side until you hit the pit. Then remove the pit and stuff the date with the cheese of your choice. Generally salty and usually creamy, the contrast cheese will have with dates will have your your brain trying to figure out what exactly it is that your tongue is eating. It’s a trip! Here are some suggestions: 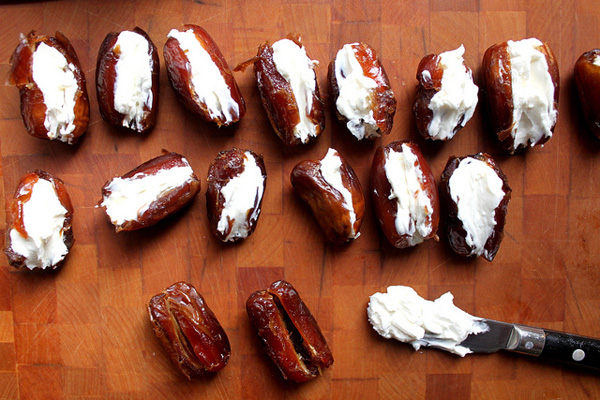 A common choice of cheese for dates is cream cheese, since everyone tends to have a block of it or tub of a spread version of the stuff (they are not the same, read the ingredients). What may be a mild cheesiness factor, it makes up for with its smooth creaminess inside of a date. Even funkier would be goat cheese, especially if you’re a fan of it. 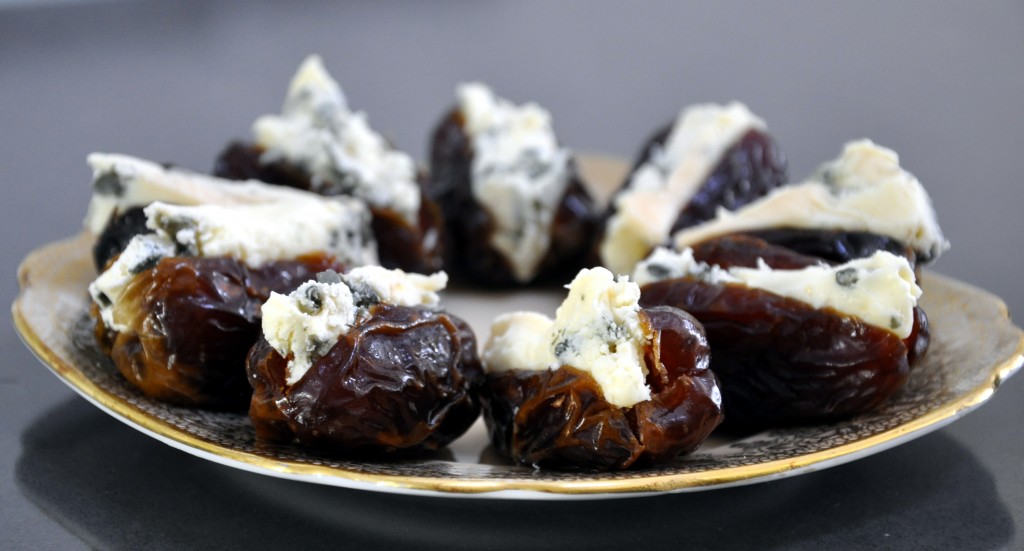 Particularly Gorgonzola for its deep but not too intense funkiness, is a popular choice. While it was a little strong for me, blue cheese lovers will definitely dig the potent cheese dancing around with sweet dates on their taste buds. 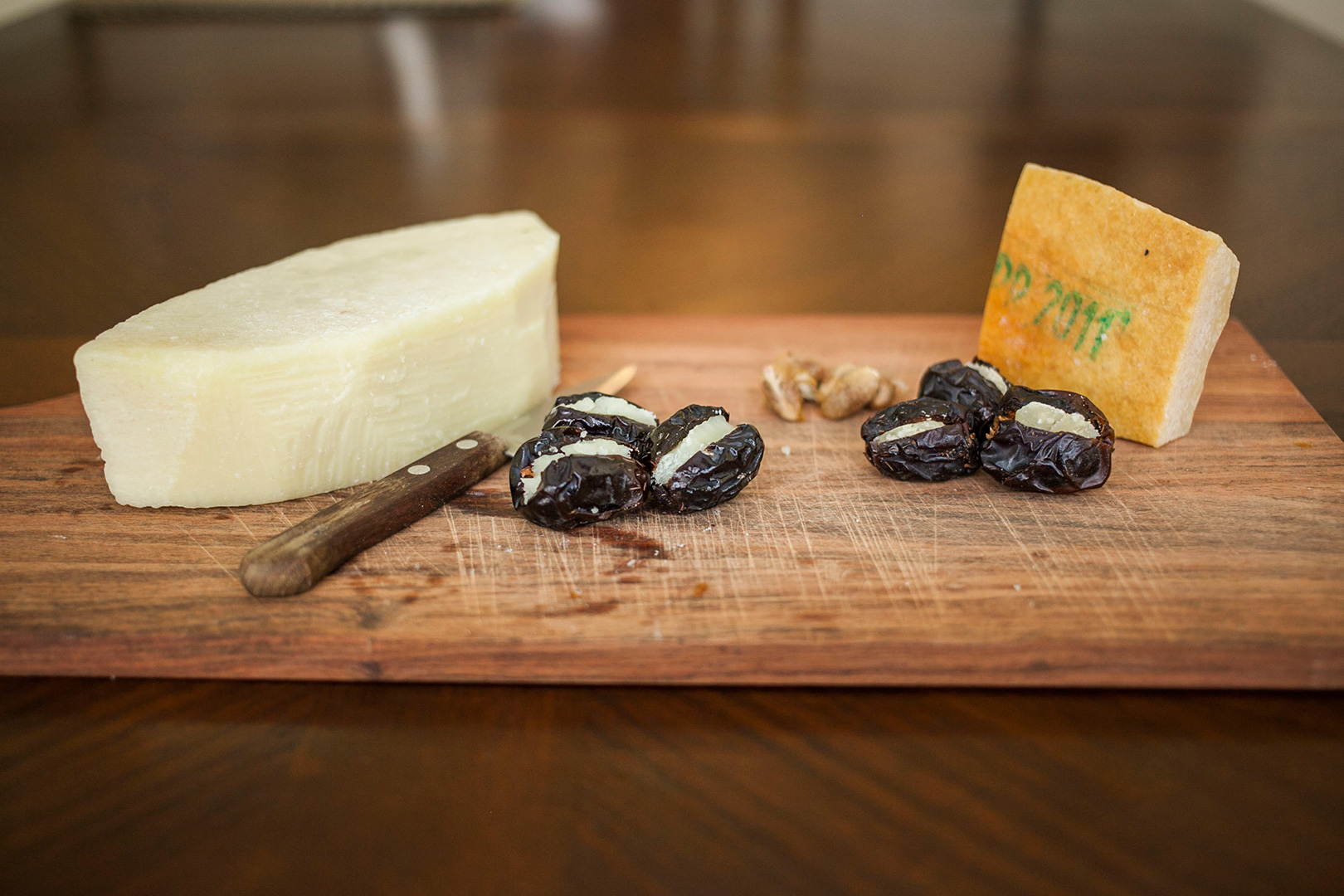 My personal favorite. Blocks of real Italian cheese imported from specific regions of Italy, aged for anywhere between 12 to 24 months before being sold to market. These cheeses have to go through a process and get certified before they can be called their names. A chunk sliced off of a block stuffed into a date provides a flavor combo unlike any other.

I like a chunk of aged Italian cheese in any date, but particularly love it in Ajwa dates, the kind famously mentioned by the Prophet, peace be upon him, for healing purposes. Somehow, the combination of Ajwa and Parmigiano-Reggianobrings out a flavor of a banana milkshake. I have no idea how, but it just does. And I’ll take it. And there’s just something so Prophetic about Ajwa dates filled with sheep’s milk. Y’know, all the Prophets having served as shepherds, the hadith about Ajwa dates, the Prophet preferring milk over wine, etc? You know what I mean.

3. Stuff them with nuts, salted, toasted, or smoked 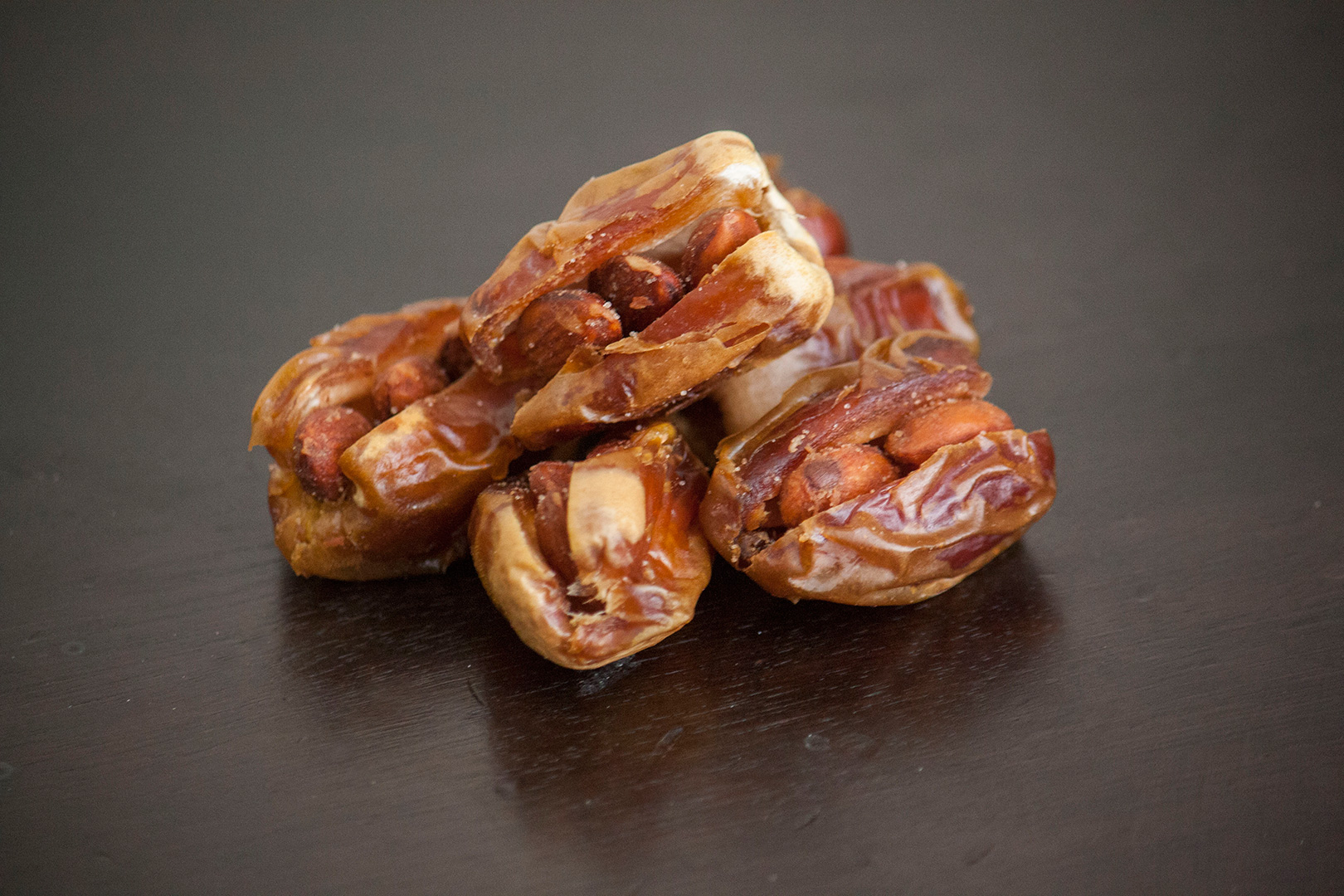 Dates do have somewhat of a nutty taste themselves, and eating them with an actual nut intensifies that flavor. Sliced almonds inside dates is something you’ve probably seen. But why stop at puny little slivers of almonds? Go with a stronger flavored whole nut to enhance the nuttiness altogether.

To maximize the flavor of the nut going into your date, try the following.

4. Wrap them in bacon (Halal, of course) 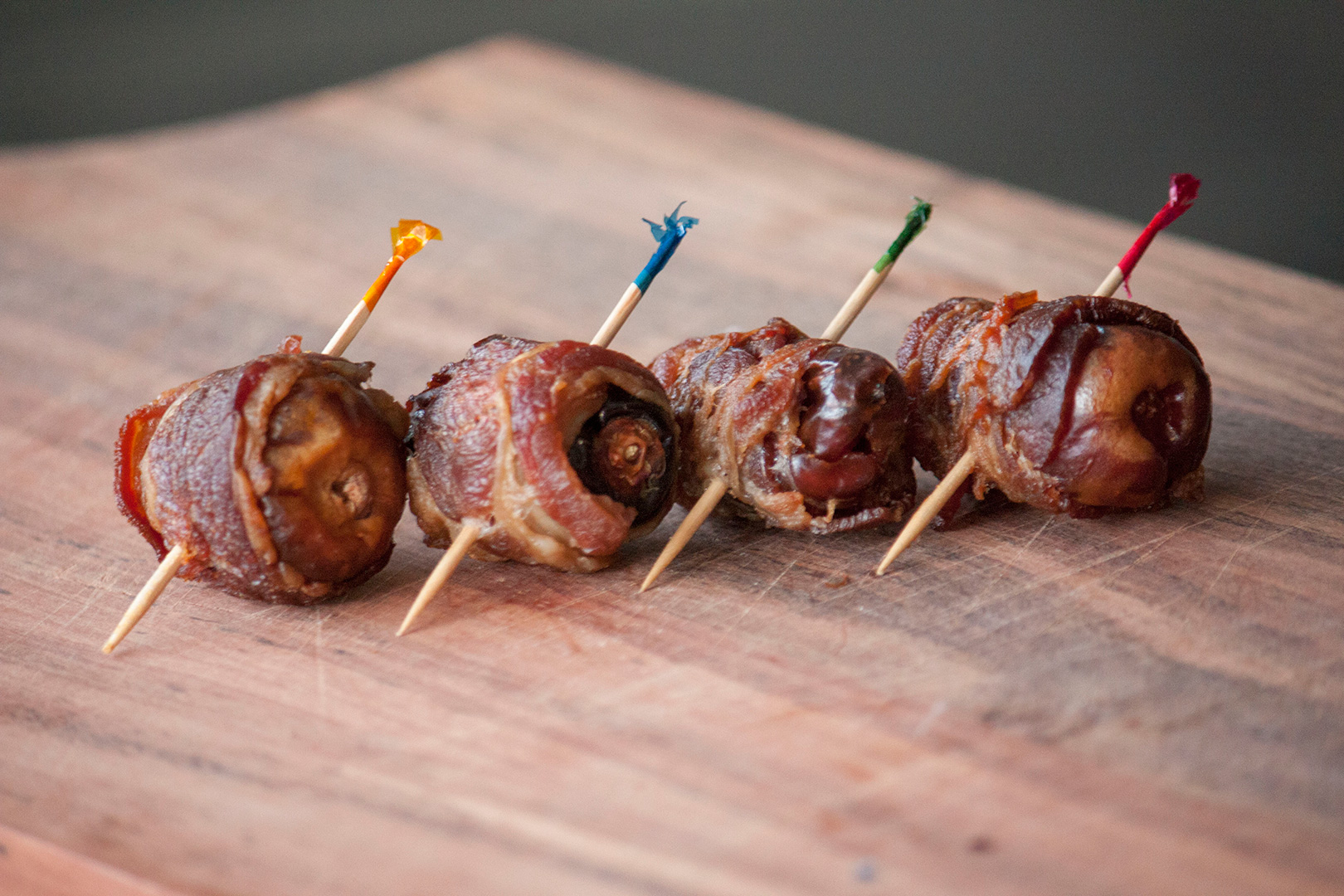 If you’ve ventured into trendy food culture, you’ve probably already seen this in a magazine or on Food Network or something. It’s kind of strange, because growing up dates were something so strongly Islamic in nature, yet here are people wrapping them in salt-cured, smoked strips of pork belly, AKA bacon. Yuck!

Thing is, this can be made using Halal bacon, too. That’s because bacon is not just a pork product. It’s essentially taking meat or a meaty type of food adding salt and smoking it. That’s why turkey bacon is a hugely popular alternative in America. And people make duck bacon and even mushroom bacon for vegans. For Muslim Eaters, turkey bacon is available in many Halal stores.

My personal favorite: Halal beef bacon. Unlike turkey, cattle actually have a belly region called the plate section that can be harvested and baconified. The result is a strip of meat that not only is salty-sweet-smoky, but has the hallmark of what makes pork bacon lovers rave about their stuff: animal fat. Only here, it’s beef and totally Halal.

I know, the term “bacon” can give the average Muslim a reason to be scared. But think of these like that appetizer Sabri Nihari caters at weddings in Chicagoland, pairing salty, spicy fried chicken with sweet, purple imli (tamarind) sauce. Those things always run out, and chances are bacon wrapped dates will, too.

Making these bad boys can be a bit tricky. We want to roast the bacon surrounding the date at a pretty high temperature so as to render off the fat and crisp up the meat yet avoid burning the fat that collects. The smell of Halal bacon is strong as it is, but burnt fat is not nice and can even be unsafe. The way around this is simple.  Wrap one date with half a strip of Halal bacon (you can cut them with scissors) then place on a wired rack set over a baking sheet covered in aluminum foil with a little bit of water in the tray. 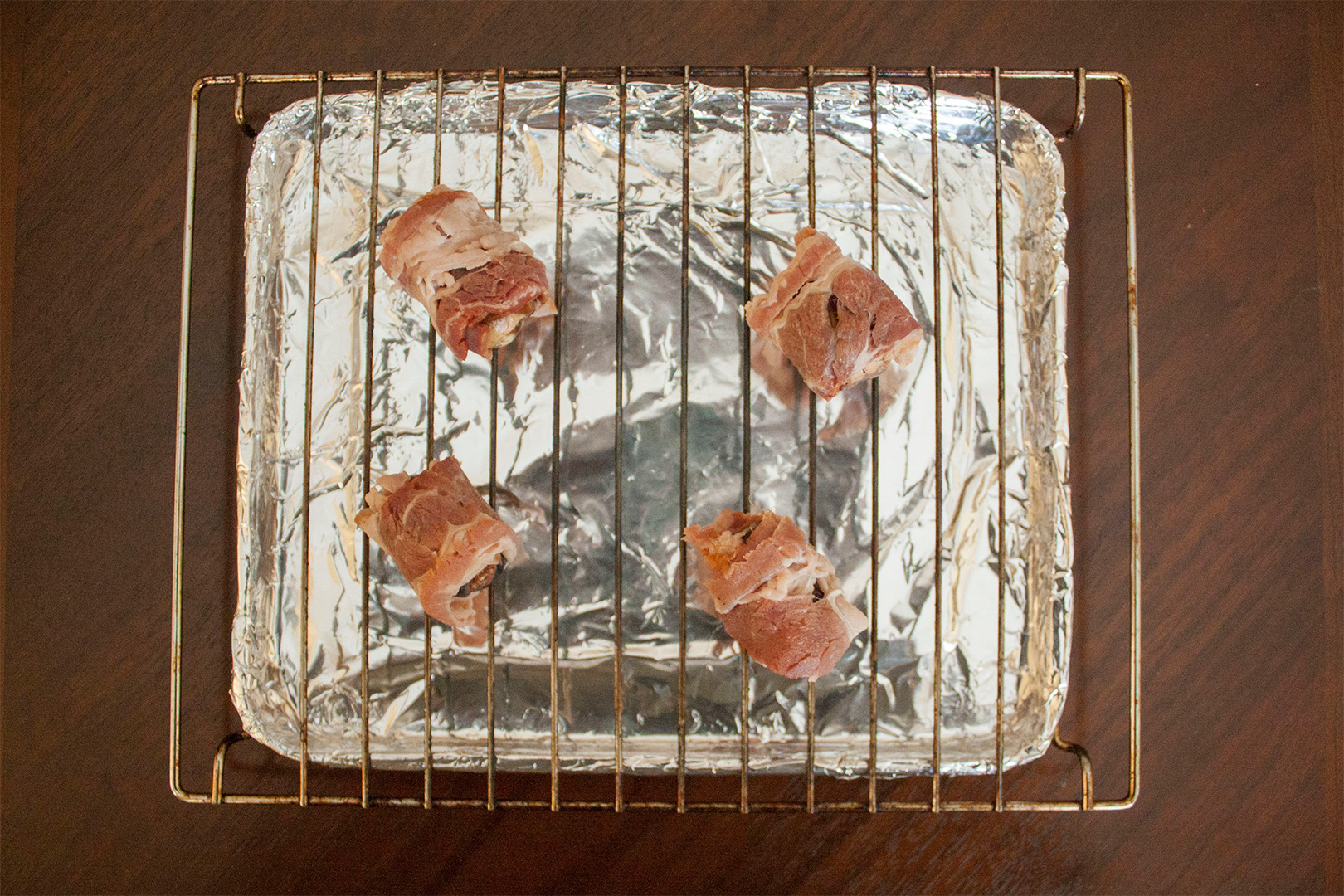 This can be done in large batches on a baking sheet in the oven, or in a toaster oven for smaller batches. Check out how I rigged the tray and toasting rack from my toaster oven. Did you know you can slide the tray directly into the rack? Well, now you do. 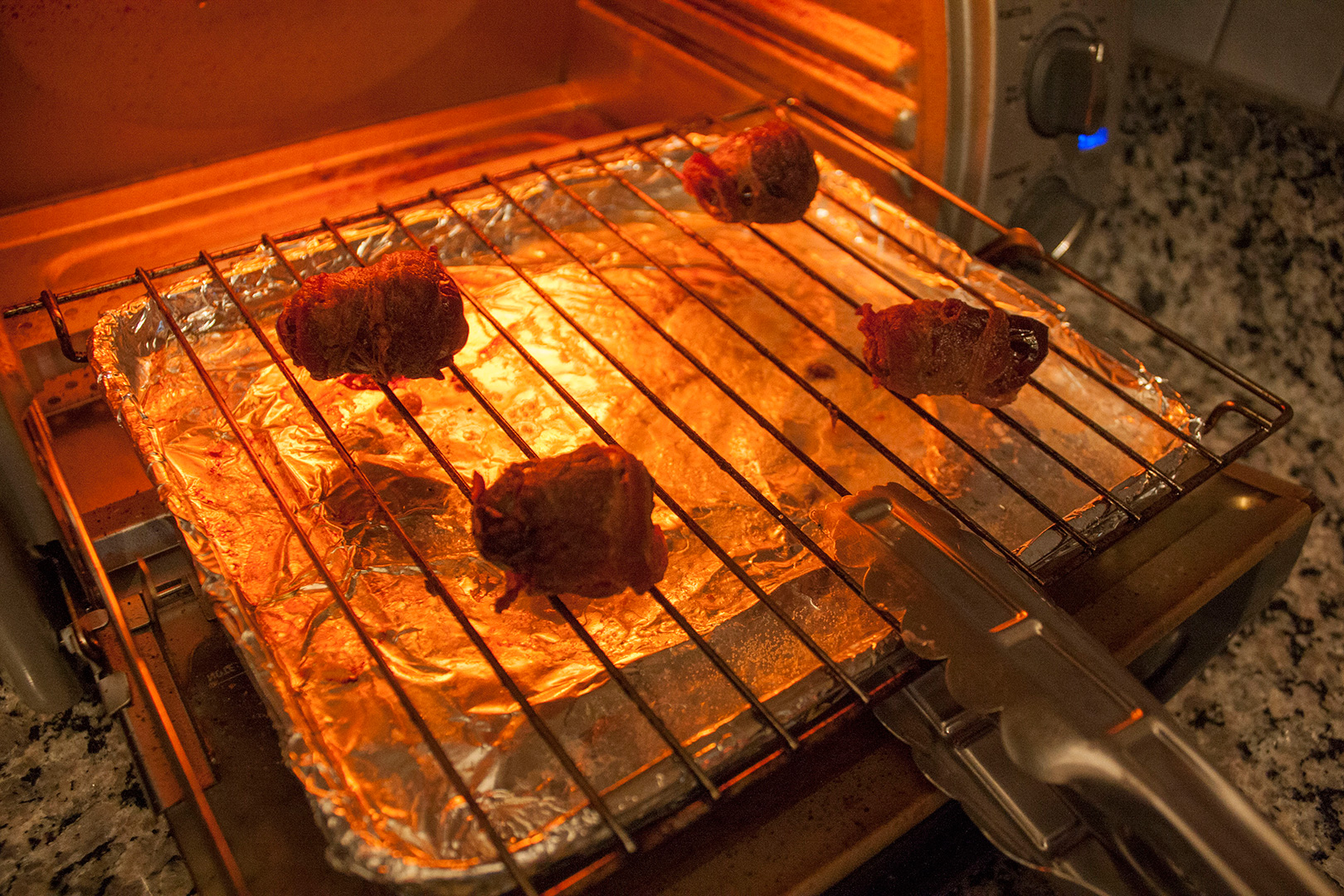 Your tray will catch the fat that will render and drip to the bottom as they bake while the water will prevent the fat from scorching. As long as you have some water in the pan, the fat can’t burn, and as long as the oven temperature is hot enough, the steam from the water won’t make the bacon soggy (if it does, simply flip the dates and turn on your broiler to quickly crisp up the soggy parts). You’ll know they’ve finished cooking when the fat renders off and collects at the bottom of the tray, and the bacon is crisp and browned.

Unlike simply stuffing dried dates, this method actually cooks the date altering its dried form by softening its flesh and intensifying its flavors, which will be needed for pairing with the strong intense flavors of bacon. For this reason, use large, sweet dates like Medjool or some big Sag‘ai. A big, almost creamy, sweet date combined with a crisp wrapping of salty-smokey Halal bacon gives multiple layers of flavor and texture in each bite.

5. With whatever you want 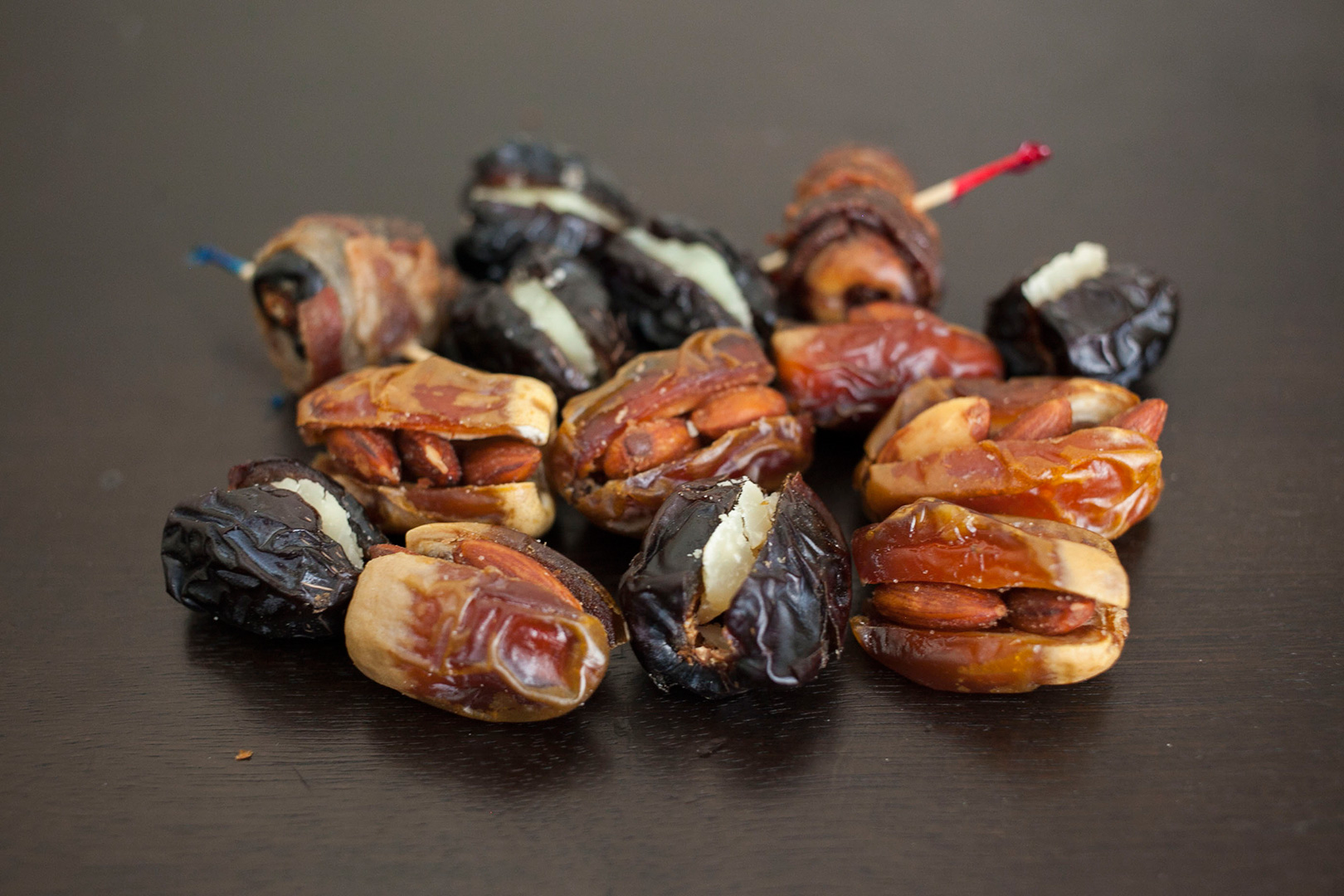 Who says you have to stick to one of the variations listed above. Mix them up! A classic American appetizer in the 70s and 80s is “Devils on Horseback,” pitted dates stuffed with blue or goat cheese wrapped in bacon.

Whatever you do, eat your dates and enjoy, them, too. The Prophet, peace be upon him, said the most enjoyable time for a believer is when they break their fast. Upgrade that date, and upgrade the thankfulness you have to Allah for the bounties He’s given you.

Speaking of dates, check out this hadith on dates and love for the Prophet, peace be upon him.

Abu Hurairah, may Allah be pleased with him, said: “Once the Prophet (ﷺ) distributed dates among his companions and gave each one seven dates. He gave me seven dates too, one of which was dry and hard. But none of the other dates was more liked by me than that one, for it prolonged my chewing it.” (Bukhari) 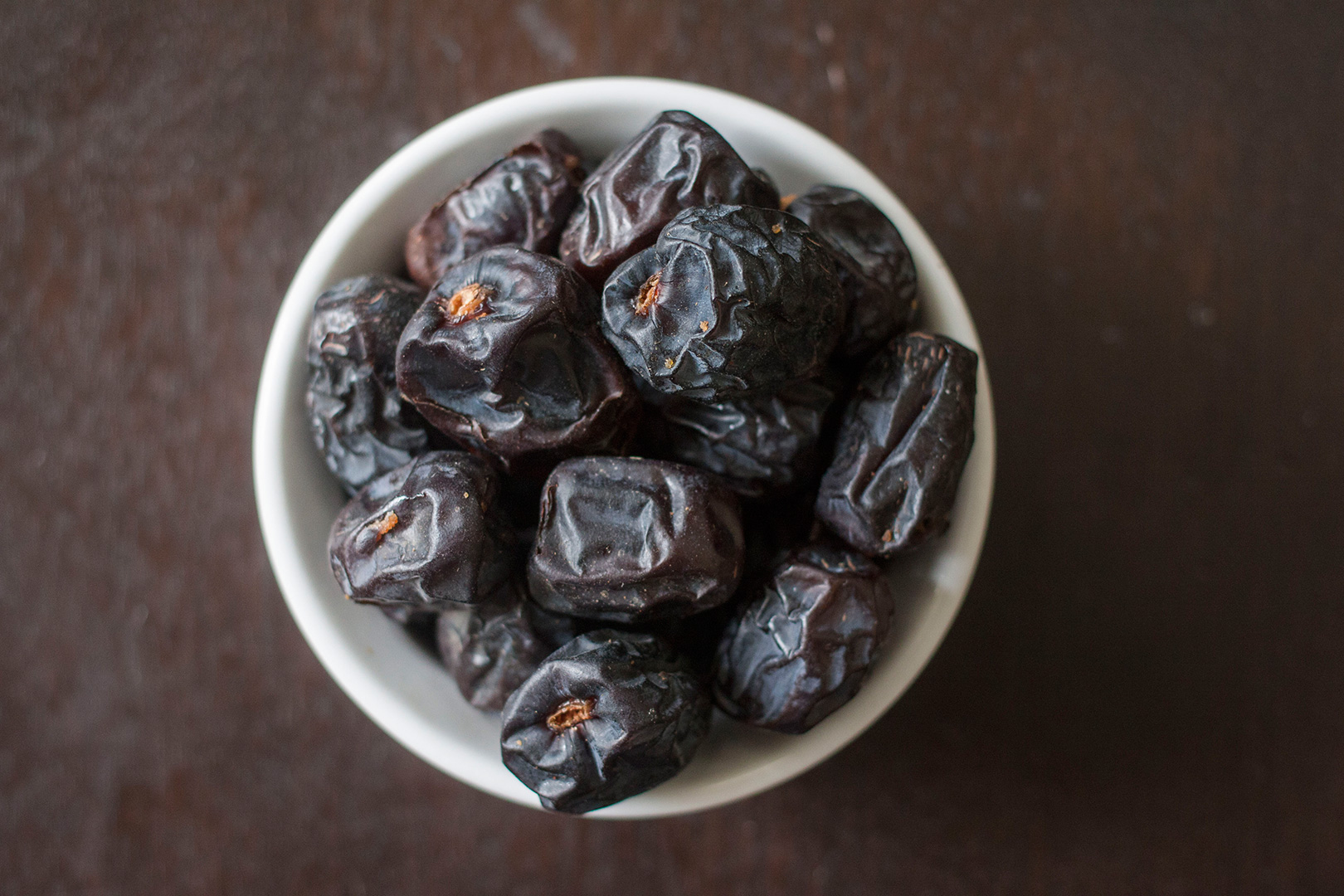 Nothing but love. Beautiful, beautiful love. 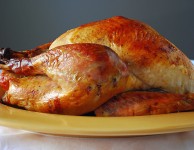 Everything You Need To Know For Buying a Halal Turkey 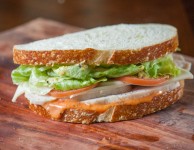